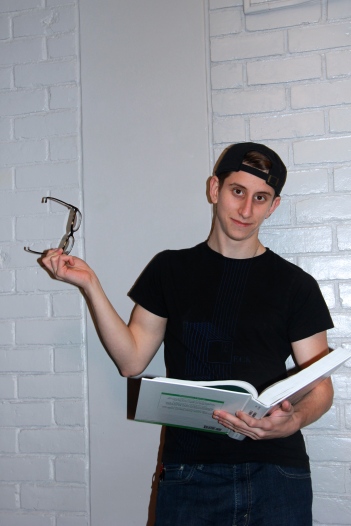 I am Yotam. I think you might want to ask the question why am I or what am I…

Who are you as a musician?

I’ve played a lot of different instruments growing up and whatnot. I started DJing after senior year of high school. I got some money from the debate program at my school, and it was for strictly academic purposes, so I bought myself a pair of DJ turn tables and I’ve been kind of messing around ever since then. I think my identity as a musician has still yet to be shaped.

What do you do musically currently?

Currently I just Dj fairly small gigs. I happen to run a little bit more often in the frat party scene but I’ve done some different kinds of events and so forth.

What or who have you been listening to recently?

I’ve been getting really into Future Islands. He dances around and then just growls– he’s a terrifying character. I’ve been listening to a lot of more underground hip-hop artists. I’ve been getting into Open Mic Eagle and Mc Jenkins lately. I’ve been listening to a lot of Zedd. I haven’t gotten into Zedd in a bit. I’ve been kinda sleeping on Zedd but I think he’s one of the more interesting electronic producers out there. And even though he has a very distinct sound by this point he still does a lot of interesting stuff with it as well, like more poppy [bangers] which I really respect.

Where do you see yourself musically in a year?

I’d hope to honestly keep playing gigs, improve as a DJ, a disc-jockey if you will. A table turner.

Are you more of a hunter or a gatherer?

So, I don’t eat meat so that would be gatherer, but I’m very goal oriented so maybe that would be hunter…. If anything I’d say I’m a multi-instrumentalist.