Waiting outside in a really long line, going into a house, going straight into the crowded basement of that house, and proceeding to drink and dance to a DJ playing remixes of Dark Horse and Kendrick Lamar. A typical night at a frat house. Except not at all. Jumbonnaroo, organized by Benjamin Silver (’16), was created last year as a platform for raising money for Relay for Life, giving students exposure to resident Tufts musical groups, and restructuring the regular night of going out at Tufts. It’s a fresh take on the old “Party for Life” party fundraisers. Silver explains, “People want to see and hear and dance to live music. It’s just not about drinking anymore.” 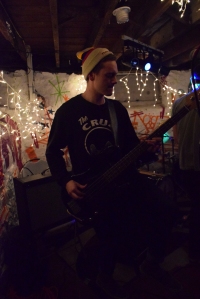 The truth in Silver’s statement was apparent in the atmospheres of Theta Chi and ATO during Jumbonnaroo. There were no ridiculous lines crowding outside the houses. People came on their own schedules the way they would arrive at a concert; some came right at 10pm, while others waited for the start of the Waldo or Shark Saddle set. Theta Chi was a refreshing something in between a frat party and a house party with some people dancing and singing along to Rollersnakes’ covers of “Valerie” and “Feel Good Inc” in the basement and others sitting and talking on the first floor. Christmas lights, substituting a spotlight, surrounded Rollersnakes and Waldo in the basement. The bands became a focus in the generally dark and chaotic frat party basements. ATO resembled more the familiar frat experience. A hot, almost pitch black basement crowded with people and the bands somewhere near the “front” of the basement. A focus on the musical groups, playing new originals and classic sing along covers (“Shake It Off”, “Stacy’s Mom”, “1985”, “Santeria”), was present though less palpable. Again, half of the crowd was in the basement dancing and singing along to the bands and the other half on the first floor talking.

Really, to conclude, Jumbonnaroo was a success. For those who love the classic frat house scene and for those who are looking for a different going out scene, Jumbonnaroo had both. For those interested in more exposure to musical groups at Tufts, Jumbonnaroo had Rollersnakes, Waldo, Shark Saddle, and Market Basket playing live sets. For Relay for Life, Jumbonnaroo ultimately raised roughly $2500 for all types of cancer services. Now what’s the ultimate plan for Jumbonnaroo? Where are things progressing in the next few years? Silver answers, “I’m definitely planning more horizontal expansion than vertical expansion for this event. I’d like to keep venues to fraternities and artists to Tufts musicians. I’d like to add multiple options and genres for each night, and also expand into having more events throughout the week. We could have a group perform at a local bar, work with Tufts Film Series for a music documentary showing, and I’d like to repeat the Cancer Researcher Lecture series event that we held earlier this week.” If anyone’s interested in the continued development of Jumbonnaroo, Silver says he’s “always looking for houses to host, bands to play, people to help me organize.”