By Grant Fox and Jordan Rosenthal-Kay

At the time of this writing, and according to the most recent Politico #2016Blast email, there are 429 days until the 2016 presidential election. But 429 days is a lot of time. 429 days ago, Kanye’s Yeezus tour had been over for about a month. As much as the folks over at Politico would want to believe the nation’s in full election mode, we’re still in a “preseason” for the Serious Campaign. But unlike professional sports, the political preseason is the best part of the whole show. Because the official campaign teams have yet to establish offices in most states, the preseason is a wonderful mess of “grassroots” organizations trying to stoke some excitement for their candidates before the Serious Campaign season begins. The events they put on are usually unscripted, low-budget, DIY versions of the Serious Campaign events that we’ll all be subjected to in about 100 days’ time.

So in the interest of enjoying the electoral preseason for all its DIY fun, we went to Boston Bands For Bernie, a grassroots fundraiser/concert/rally at the Middle East for Vermont Senator Bernie Sanders. A chronology of events for the two hours your dutiful correspondents stayed follows.

We arrive at 8pm, and the walls of the Mid East upstairs are lined with tables promoting indistinguishable facets of the far left. Socialist Alternative, the Trotskyist party-slash-newspaper is selling their papers. A disgruntled man in a stained white tee sells lawn signs demanding a constitutional amendment reversing Citizens United, using the same typography of a Tea Partier. We’re caught in the agonizing conflict of agreeing with them on principle but not in practice; conversing with the crowd of activists takes some flexing of our liberal muscles. A local artist screen-prints shits that read #FeelTheBern and #What’sYourIssue? The crowd is considerably older than us, which doesn’t bode well for our expectations of the bands, and makes conversation difficult. The only thing we have in common with the Boston For Bernie crowd is our penchant for liberal ideology. So we talk leftist politics with a number of “activists” and inevitably sign our rights to clean email inboxes away on a few volunteer forms. Bill Lewis, a charismatic registered Republican with grey hair and a blue button-down shirt that he had hand-painted the back to say “Boston 4 Bernie,” was the most lively of the lot. You can watch a clip of him here telling WGBH emphatically “fuck it…I’m supporting that dude!” That dude being Bernie Sanders.

At around 9:15 the first band, The Furniture, takes the stage. The Furniture is a two-man band, composed of a skinny,stoic bass-face affecting drummer and a frontman/guitarist who looks like he could be Action Bronson’s younger brother. Said frontman gives half-hearted attempts at Bernie banter in between songs. “Does Bernie Sanders play an instrument?” he asks. “The revolution!” shouts someone in the crowd. And so commences the next song. The Furniture’s lyrics are vaguely political in a frustrated high school sophomore kind of way. Their first song alludes to everyone running for mayor and questions why “they” haven’t fixed the crack in the Liberty Bell. Action Bronson’s brother likes to hold his guitar up facing the crowd and strum horizontally as he sings various “edgy” one-line choruses: “I hope history will be kind” or, “I guess Coco Chanel was a Nazi.” They sound like they listened to a lot of Parquet Courts and The Mountain Goats. “Does Hillary play an instrument?” is the question that closes The Furniture’s banter. “I heard she plays the harp!” 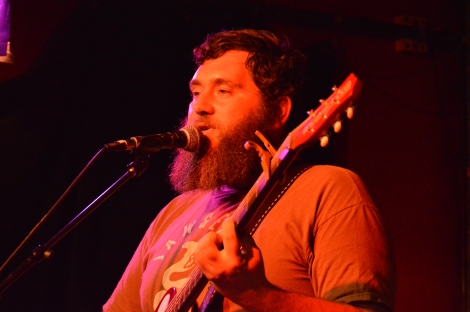 Next up is Thick Wild, a four-piece dressed like a Wes Anderson interpretation of the Manson family, which isn’t a bad thing. Their set’s a mad dance of switching instruments, flirting with slide guitar, accordion, banjo, and a song rendered a cappella. Their woozy folk, while devoid of anything Bernie-related, is intoxicating. The lead singer sounds like a less classical Joanna Newsom and one of their songs should have been the intro song to this season of True Detective.

Thick Wild finishes and some speakers take the stage, a feature of the night we had been looking forward to. Speakers at grassroots rallies are the most passionate and the least prepared with talking points or official party positions. The combination is both enlightening and entertaining. Volunteers asked for more volunteers. Chris Faraone, a tattooed investigative journalist who’s best known as that guy that did acid at the DNC and RNC in 2012, tells us about how frustrated he is in big money and the two party system. Our friend Bill Lewis doesn’t so much give a speech as let the core tenets of liberalism explode out of him. He closes by introducing the next band, whose name he’s learned mid-speech, as the “best damn band Boston has ever seen!” It was then that your dutiful correspondents left for a party on Fairmont.

Grassroots events lend the best window into the innumerable elements that drive a campaign. The music aligned with a campaign offers an indication of what unites these elements. Boston Bands for Bernie joined fiery liberals with granola enthusiasts through music whose thrust was both disaffected and hopeful, music whose character was as authentic and unpolished as Bernie himself.

Back in 2008, the Obama campaign was supported by stadium filling acts – U2, Springsteen, The National – whose politics were embedded in their music. They spoke broadly about western liberal values, about hope, change, and new horizons for America. This modern attitude and positive focus wasn’t so much absent from Boston Bands for Bernie as it was redefined and refocused. The music correctly painted the Bernie campaign as a nontraditional disruption from the left. And it’s this authenticity and willingness to stand apart from the pack that draws acid-dropping journalists, punks, college kids, modern-day hippies, and registered republicans to a hastily thrown together DIY concert on a holiday weekend. Bernie, like the bands and people at the Middle East that night, refuses to bend to the norms of the masses. Let’s see where it takes him.