Darwin Deez is back on tour a few months after releasing his latest album, Double Down.  Stopping on December 7th to play Great Scott in Allston, he blessed yet another audience with his unique indie-pop style and dance moves. Deez’s latest album is full of witty lyrics matched to irresistible pop tunes.  After his tour ended, Deez revealed some of his best touring experiences, unique style, and thoughts about his own music. 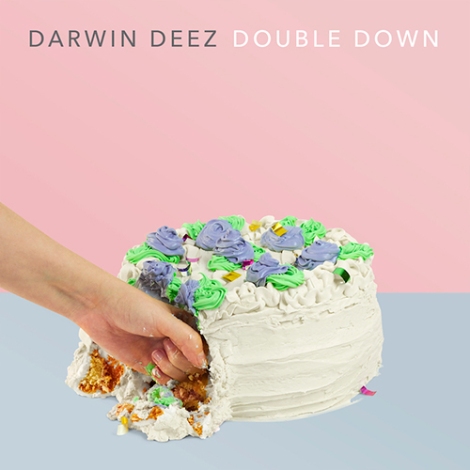 How has your U.S. tour been so far? What’s the best show you’ve played so far?

Well, we’ve done full tours of the US a couple times before.  This one was pretty standard.  Good weather, not too cold.  Minimal snow and ice.  SF is usually the best show and it was again this year.

Best show you’ve ever been to?

I think it’s Deerhoof.  Watching that drummer, I really get a kick out of his expressive movements.  I recommend it.

What’s the story behind your four-string guitar and custom tuning?

Long story short, I heard Animal Collective tuned their guitars down to made up tunings to get a different sound.  I was going for a sonic thing while also recovering my left-hand guitar chops (I hadn’t played for 5 years).  Messed around in random lower tunings with 3 strings for a while, then I started to have some songs I wanted to keep so the tuning solidified.  Added a fourth string as I got my chops back in order to play seventh chords.  The high E string always sounded too high to me to be part of a chord.

What’s it like having your best friend as the bass player in your band?

Michelle was actually too busy with her own tap dance career to play with us this year.  She was on Steven Colbert this year and had a million gigs with her dance company.  So it was kind of sad not having her presence except for a few sloppy gigs in Europe this summer.  But the replacements we got for her were stellar so the result was still excellent.

What do you think the best thing about recording everything yourself has been?  Do you think your sound would change if you recorded at a studio?

Unlimited takes without bothering anyone or being “that perfectionist guy.”  I think my sound would change hugely if I went to a studio yes.  I would sound less unique I think.  But no, the best thing about recording yourself is you’ve just saved $15,000!

What’s the idea behind having fantastical music videos?

Why make a promotional tool when you can make a piece of art?

I love to analyze it in private and listen very closely.  The songs always move right along from section to section, and I like that.  I like my mixes, I like my snare sounds a lot.  I like for it to be pumping, I like to listen to them loud and dance around the house, especially when I just finished mixing it and it’s done.

A lot of your songs are about heartbreak or bitterness, but they communicate that with bright pop tunes and witty lyrics. What’s the thought process behind this odd dichotomy in songs like “Last Cigarette” and “Bad Day”?

It’s weird, it’s not really a thought process.  It just comes out like that.  So I can’t answer with authority; I can only speculate.  So I guess maybe I’m trying to balance out what would otherwise be very cheesy “up” music with some weightier words in order to give it a sour sting.  Sweet and sour chicken, like.  Is good.  That’s my guess.