At only eighteen, Kodie Shane is a member of  Lil Yachty’s Sailing Team and has dropped mixtape upon mixtape in 2016. She doesn’t plan on slowing down in 2017 with the release of her new project Big Trouble Little Jupiter, and her own headlining tour around the country with artists Saucy Longwe and Cymia.

I caught up to Kodie during her Zero Gravity Tour in Cambridge at the Middle East. While energetic and vibrant on stage,  she was calm and collected seated in the booth with a plate of chicken kebab where she posed for a few photos. Check out the interview below.

Did you manage to catch the NOISEY Atlanta episode last week?

I saw that your song “Sad” featuring Lil Yachty was on the NOISEY Atlanta playlist on Spotify, so I was looking out for you.

In that NOISEY Atlanta episode, Killer Mike was saying that Yachty brought something back to Atlanta that it didn’t have for a while, referring to the more joyful sound he brings to the Atlanta rap scene. Do you relate to that?

Super, I definitely think that I’m just bringing back a more fun sound that is not really around anymore, a sound that’s kind of just like “do what you want”;  a fun type of vibe.

What does it mean to you to be the only female in the Sailing Team collective?

Right. So being the only girl on the Sailing Team doesn’t differentiate you from the rest of the collective.

I loved your new project Big Trouble Little Jupiter and saw that it was almost entirely produced by Matty P and D Clax. Could you tell me more about who they are and how you started working with them?

Thank you so much. I’ve been working with Matty P and D Clax for forever. They’re, like, a production company which my mom has a part in, too. My mom’s my manager. I’ve been pretty much working with them since forever; they gave me the first beat to record on. The first song I recorded and everything was with them, and they kind of just helped me build my sound and everything, you know?

What motivated you to sign a deal with Epic Records as opposed to staying independent?

It felt like when we were presented with the deal they weren’t tryna get me, they weren’t trying to take anything from me, they were only trying to help, that’s how it felt, you know? It always felt genuine, it always felt like they wanted the best for me. I feel like most people, they just sign deals and they don’t even really know what the deal is about, they don’t know what they’re signing, they just think they’re getting some amount of money, you know? So when I looked at the deal, when we talked about the deal, it seemed genuine, like, they only wanted the best for us. That’s how everything feels, I have an actual relationship with LA [Reid] and everything’s cool. I love LA [Reid].

So you’re close with LA [Reid]?

Yeah, we definitely have a relationship, like I can text him; we’re cool.

Any non-musical artists or organizations that you want to collab with?

Any upcoming projects coming up?

Any word of a new Sailing Team freestyle? 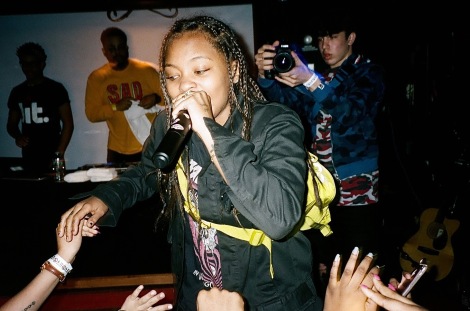