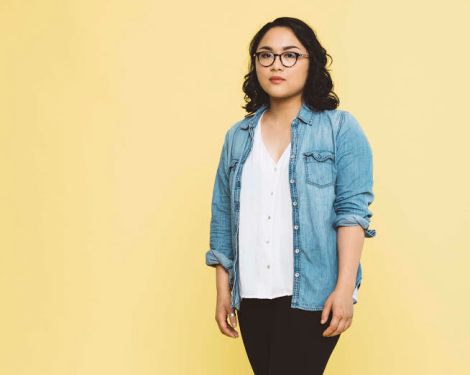 Bay Area singer-songwriter Melina Duterte, known to the music world as Jay Som, is really blowing up. In the last year or so, she’s burst onto the indie rock scene as a fully formed artist with a signature sound and a growing fanbase. Last year’s album Turn Into was entirely written and performed by Duterte. The record’s closing track is the brooding standout title track where massive reverb-laden guitar strums swirl around a driving beat, cradled by Jay Som’s calmly lilting lyrics. The album has a wonderfully woozy sound that instantly envelops you in its haze.

Jay Som was also a part of a unique tour of prominent Asian-American female indie rock artists alongside Mitski and Japanese Breakfast, which she describes as a “phenomenal” experience. This year she’s playing at SXSW in Austin, and then touring the country with a full band. Before she comes to Boston on March 28th, I chatted with Jay Som about the Bay Area, what it means to be a minority in her music scene, and dogs:

So you’re from the Bay Area, and your music has this really beautiful California haziness about it with all the layers and textures you put into it. Could you elaborate on how where you grew up has shaped your music?

Yeah, I think the Bay Area is a very beautiful, lively place. And it is very inspirational because you can go out and there’s always something to do. Especially in like San Francisco and Oakland, there’s like always shows happening and to be in that environment is very… It changed me.

As a woman who is a minority in a part of the music scene that is dominated by white guys, how do you think you fit into that scene and what did it mean for you to go on tour with other Asian-American female artists like Japanese Breakfast and Mitski?

Yeah, I think the indie rock is predominately male, like white male. It is something that needs to be talked about because I feel like the face of indie rock is changing a lot, especially the people who are spearheading it. You know, I’ve seen so many articles… well actually one in general about that Fleet Foxes guy. He was saying that indie rock isn’t the same anymore. [He said] It’s not like it was in 2009, and I thought that was really funny because every day I see so many women, nonbinary people, trans people, and people of color that are just killing it in the indie rock scene, cause they have to, that’s the way it is. The Mitski tour was phenomenal and it changed so much of my life because it was so important to me to be on the tour and see both Michelle [Zauner from Japanese Breakfast] and Mitski perform because I really idolized them in certain ways and I really looked up to them and I learned so much from them. To be on a bill with three Asian-American women, it’s still insane to think about because no one’s seen that before.

You have a way of articulating really specific emotions your lyrics, but you keep them really vague in this poetic way. What’s your process for writing them?

So I hate lyrics and they always come last [laughs]. I kind of push myself to spend more time, but usually what happens is I come up with the idea for the song, then I record it or like write it and record all the instruments, and then as I’m listening to the song, I come up with the lyrics. So, it’s always the hardest, hardest part cause I need to sit down and frustrate myself over it, and I think the most frustrating part is wanting to make the lyrics really mean something. And I’ve gotten to the point where I really don’t care [laughs].

So, do you think you intentionally keep them vague in that way? Because I feel like people relate to them because they’re so universal, because they’re so simple and get at emotions really well. Is that a thought process that goes through your head?

I think it is, definitely. I think it ends up being intentional because the first half of the process is so… it’s not genuine in a sense where I’m like “I have to be really political” or “I should be super deep about this.” I guess that is why it is a little more relatable because I don’t like to sing about anything major, I guess.

On the subject of lyrics, some of your songs are about some pretty dark topics, but they have these cheery melodies, and you also have these dissonant sounds. Do you like having that dichotomy between the lyrics and your music?

Yeah, I think that’s always a very cool sort of theme, like a very good mix. I’ve always felt that way, where it sounds like a mechanism or a cover from trying to be too sad. Songwriting is a cathartic process, and I think in some ways you can mask that sadness trying to make the music sound happy, and sometimes it’s an intentional thing. Sometimes it’s more of a stylistic thing, too.

For a self-proclaimed “indie” artist with a guitar-focused sound, you combine a lot of diverse influences into your music. Who are some of the artists that have had an influence on your sound?

I think Blink 182 [laughs]. Definitely number one is Death Cab for Cutie. I would just play along to them all the time. I love Chris Walla and Ben Gibbard’s guitar style of playing, and I picked up on a lot of that, like their chord progressions and the structures of their songs. So Death Cab for Cutie is a huge influence, and they kind of still are in a sense. It’s so good to have them with me at all times as a reference. Others, hmm… I guess Yo La Tengo, definitely. They have a softer, intimate, weirder kind of sound. I love them a lot.

I also noticed, on that same note, that on your new singles off your forthcoming record, you’re incorporating more of a clean, pop sound, especially on “Baybee.” Did you want to expand your sound on the new album? Is it a songwriting thing or a production thing?

I think it’s both. So the buffer in between Turn Into and Everybody Works was such a long time. It was probably like a year, so I was already working on the new demos for Everybody Works [when Turn Into was becoming popular after its release.] It’s kind of a natural evolution of sound, where I think obviously my songwriting changed a little bit, but my production too. I intentionally wanted to have more of a drier, cleaner sound. My layers are still there, and I still want that sort of, well, not like trademark, but kind of like a Jay Som sound, but also a little different. I wanted certain instruments to be heard, made my voice a little louder. Yeah, just more like a traditional approach.

Was the new record all recorded solo like Turn Into was?

Yeah, it was pretty much the same thing, except I had my friend do background vocals on most of the songs.

So, on that same note, I was curious: I know that you play a lot of instruments. What’s the count, how many is it now?

How many? Oh my gosh… I think it’s five or six. It’s not that much [laughs.] … I think that’s my favorite thing to do [playing so many instruments]. If they’re there, you might as well learn them.

Are you going to be playing with a band on this tour?

Definitely with a band from this point on. I really don’t like playing solo. It’s just too nerve-wracking, and I kind of have to change the way I play and sing because I’m live. So the live band for this entire tour will be full: guitar, bass, and drums.

On that same topic, how do you think that changes your, since now you’re playing with all these other people, but you compose and record it alone?

I think it makes it better in a way because it sort of emulates the record, but Oliver and Dylan [her bandmates]… they bring so much new sound and their own skills to the table. It’s just so fun to play with them because, I mean I teach them the parts, but they end up making it more crazy, and it just sounds great. A lot of people have told us that we end up sounding just like a classic rock band [laughs]. I don’t know if that’s like a bad thing or a good thing, but I hope we’re pretty fun.

Finally, I read that you love animals. What’s your favorite kind of dog and why?

Is it basic if I say corgi? Actually, no I’m not gonna say corgi. You know what? I’m just gonna go and say Chihuahua, and I’m not ashamed to say that. I love them so much, and I love how annoying they are. But they’re so goddamn small, it’s crazy.

Be sure to make a midweek trek to Great Scott in Allston when Jay Som swings through on Tuesday, March 28th at 9pm.