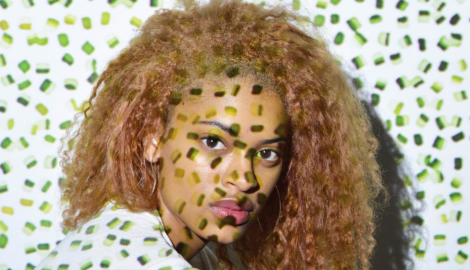 My first introduction to Annahstasia Enuke was as a Melisma Magazine hopeful—it was the summer before my freshman year and I was scanning the magazine’s website with a reverence that makes me cringe now. By chance, I stumbled on Enuke’s snapshot, one of a series of short, five question interviews that Melisma conducts with student musicians. In response to the question, “Where do you see yourself in five years?,” Enuke, who now goes by STAZ, says, “Either at the Grammys for my psychedelic jazz-rock record in a spike choker and a baby doll dress” or “at grad school.”

When I meet Enuke in person, she exudes the same striking confidence as she does in her now three-year-old snapshot. Her parents raised her that way. “Both my parents are artists,” she says, “they always encouraged me to have these massive dreams.” She laughs. “When I was 16 or 15, they sat me down for a family meeting about how I’m going to be famous one day and how I’m going to handle that emotionally.” She acknowledges that a conversation like that one might seem bizarre to most people, but she credits her drive and self-assuredness to her parents’ own confidence in her. Enuke says, “It just never really made fame, or other goals that were that big, that big to me. They just seemed like normal goals.”

Though music is Enuke’s creative and professional focus now, when she started music at 16 it was just a hobby for her. Enuke’s first venture into songwriting was weekend jam sessions with a high school friend. She continued to experiment with music throughout high school, creating a foundation in jazz and more classical standards. The shift in her music career came when she signed to her current label, Buskin Records, at 18. When Enuke arrived at Tufts as a freshman, she was already a signed artist.

However, balancing an education in political science with an education in navigating the music industry proved to be a challenge, especially as a young black woman. “The music industry doesn’t really have space for black girls who want to go to college,” Enuke says. In fact, she found that her professional career not only detracted from her educational ambitions and her artistry, but also from her right to an identity. “It’s either you’re a black girl who is pretty and has a voice, and they’re going to put you in a latex thing and have you dance around and do pop, or you’re super soulful and deep and you came from the ghetto, and your family’s poor and you’ve done drugs fifty times,” she says. Enuke was struggling to take the reins on her own career and on her own artistic direction. She found herself without a voice.

“I went in without any experience and I went in with people who were well meaning but were not woke people. Being that I was so naïve, I went with the flow and did what they asked me to,” she explains. “I wouldn’t do things that would compromise who I am morally, but in terms of my sound and the songs I was writing and the production direction, I didn’t put as much of my weight into it because I didn’t know what I wanted.” In addition to an artistic path that began to feel less like her own, Enuke felt pressure to leave school to focus on her career. Pulled in several different directions and looking for clarity, she decided to take a year off after her sophomore year. Yet the time off didn’t solve the problems she thought it would. She says, “It was a hell.” The year off did, however, allow Enuke to see her relationship with her label clearly. “It was good because for the first time I had to really determine what I wanted because otherwise I was just sitting around, getting the silent treatment, waiting around, wasting away, going into debt,” she says. Though the year off “just wasn’t a good space,” Enuke emerged from the year ready to make music professionally without waiting for permission from anybody. She was ready to take control of her artistry.

Enuke began to seek out communities that would foster her art rather than stifle it. “It became a journey of trying to find my people and trying to connect with a black community in LA without having any sort of ‘in.’ I started inserting myself into these places and trying to find a sound that spoke to me,” she says. The journey eventually led Enuke to return to Tufts, a place she came to realize was “more conducive for becoming an artist.” She went about finding a community of artists here, in an environment geared toward collectivity as opposed to the industry’s sink-or-swim atmosphere. Enuke explains, “Here, there are people who are industrious and entrepreneurial, but are not cutthroat in the sense that they won’t do anything for you unless you do something for them. It’s a lot more symbiotic here.”

The sound that Enuke has worked to develop in an enclave of student creatives is built on a foundation of soul. “I went on tour with my uncle and he gifted me an iPod full of all the music that influenced his life and his music career. There was Otis Redding, Nina Simone, Billie Holiday, Bette Davis—everybody that is in the soul anthology and in the blues anthology and in the rock anthology.” Enuke’s songwriting process is based on the work of these artists.. “It helps me to write a song with four chords in C, have a super simple melody, then drop a sick beat on it, or drop a really cool bass line, then work weird from there. I start from that core of love songs that Aretha Franklin would sing because that’s where I’m coming from in terms of what I know to be a song,” she says.

Enuke describes her sound as one that is “still in flux, but always has a lot of soul.” Her voice is deep, powerful, and unwavering, yet still able to find moments of tenderness. In other words, it’s soulful, though Enuke describes her sound as “lush.” “I don’t do a lot of things that are sparse or vibey. I do a lot of things that are very solid, earthy, and lush,” she says. Enuke admits that lush used to mean drowning out her voice with extravagant guitar licks, bass lines, and orchestral movements. Now, she says, “I don’t force things as much.” Her main evolution as a songwriter has been developing her understanding of what constitutes the lush soundscape in which her voice thrives and what doesn’t. She’s learned both what her voice is capable of and the room that it needs to achieve its power.

Though Enuke’s artistic process for her non-musical endeavors—she also creates prints, ceramics, sculptures, jewelry, and films—is more controlled, her songwriting process is a near-spiritual one. She says that her music “comes from a world or from a soul that [she’s] not directly in contact with all of the time.” It’s a place that she has to tap into. “Art is cathartic for me, but nothing is cathartic like music is. Music is like screaming on top of a mountain every second that you’re doing it. To be able to write anything that allows me to access that feeling, I don’t put any corrals on it,” Enuke explains. That approach, as well as her focus on feeling and soul, is what allows her to create genuine connections with her music. “That’s where I spend my time developing. I’m figuring out: ‘How do I pull out all of the stops? How do I make that person cry? How do I make that person shiver?’ [I’m figuring out how to] have a connection with the person in front of me or the crowd in front of me enough that I know what they need,” she says.

Lately, Enuke has been channeling her energy into a project set to release this summer, with collaborators stretching between Los Angeles and Australia. “My tentative title for the EP is Her Church and Her Steeple because the journey that I’ve been on has been about realizing my own worth and realizing my own strength and making myself my religion,” she says. The EP uses religious themes to present Enuke’s story, a coming of age that ends with her realization of the power of “seizing the demigod in yourself.” She says, “I’m at this place where I’ve set a base, a community space where you go and worship. That’s what this EP is going to be, a base.”