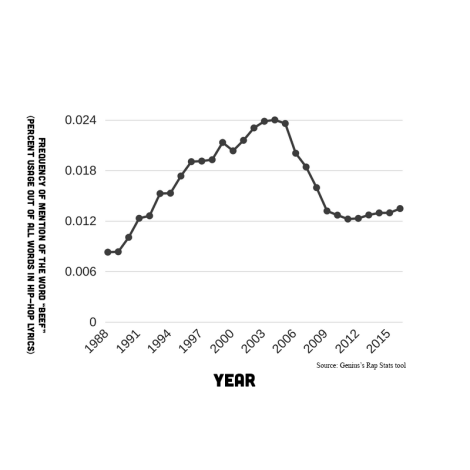 Vince Staples recently sat down for a 30-minute interview with the writer and TV host Touré to discuss his new album. About ten minutes into the interview, Touré asks Staples who won the beef between Remy Ma and Nicki Minaj. “Shit is fucking corny,” retorts Staples in his characteristic deadpan. “Isn’t beef a part of Hip-Hop?” implores Touré. “It’s fucking corny,” Staples replies. Watch battle rap instead, Staples argues, at least those guys are mostly friends and write more entertaining insults. What’s so fun about two successful musicians spending time and money to say mean things about each other on their songs?  “It’s like, ‘I’m gonna say really hurtful things about you for the sake of hip-hop. Oh,’” says Staples. Touré makes a face at this; the kind of face someone who loves hockey fights would make if you asked them to just watch WWE instead.

Touré is twice Vince Staples’ age, and their conversation encapsulates the growing generational divide in Hip-Hop about beef. As Staples’ generation makes up an increasingly large portion of rappers and rap fans, beef is becoming less relevant.

On the surface it may seem like Hip-Hop beef is still relevant. In just the first few months of 2017, Remy Ma reignited her feud with Nicki Minaj, Rick Ross and Birdman have been trading shots, and Drake took another shot at Meek Mill on the opening track of More Life. But outside of fans getting excited about the newest mean spirited lyrics, beef doesn’t have the consequences that it used to. Beef still happens and people still pay attention, but it has less of an impact on Hip-Hop culture. In other words, fans enjoy the feuds and diss tracks, but assign little meaning to the outcomes. Perhaps there is no better example of beef’s waning relevance than its impact on Drake. Over the past five years, Drake has had spats with Kendrick Lamar, Pusha-T, Jay-Z, Common, and of course Meek Mill. The outcome? Nobody is worse off, not even Meek Mill who spectacularly lost his beef with Drake in the summer of 2015. In fact, it’s likely that at least one of the names on the list of artists Drake has beefed with came as a surprise to you. Nothing speaks to the irrelevance of beef like the one between Drake and Kendrick Lamar, two of the biggest names in the genre, being lost to history.

Beef has historically been predicated on one of two things: regional/group disputes or authenticity. Because local music scenes were stronger before the Internet, rap fans were more tied to geography in terms of their preferred artists. Regional Hip-Hop scenes had their own distinct sounds, top artists, and fans. When artists from different regions had beef, it was easier for this beef to spill over into the entire geographic network and become a beef between regions/groups instead of individual artists. These beefs were usually predicated on which region was better, and could range in scope from neighborhoods to entire sections of the country. The East Coast vs. West Coast battle of the ‘90s is a prime example of a regional feud, but many had a smaller reach. In the ‘80s, the New York neighborhoods of Queens and South Bronx had a more localized regional beef that drew in many different artists.

Rap beef has also been predicated on the struggle between real and fake. Beef is a way for rappers to call out their peers for being inauthentic while simultaneously proving to fans that they’re the real one, the one deserving their respect, and therefore their business. “You a fan, a phony, a fake, a pussy, a Stan,” rapped Nas on “Ether,” not only calling Jay-Z fake, but calling Jay-Z’s entire premise for