This past year, Tucker has emerged fully embodying the movement towards variety and diversification that defines Tufts’ unique music scene. Consisting of members Josh Berl (bass), Noah Cutler (guitar, vocals), and Zoe Schoen (drums), Tucker represents a low-pressure sharing of music and love that can often be lost within the technicalities of labeling a group as a “band.” Whether through their lyrics, head bop-inducing instrumentals, or the band’s dynamic, Tucker exudes a certain relatablity, one that can only emerge in a tight-knit music scene like that at Tufts.

The band started out as an exchange of written songs; Tucker’s members are buddies that just happened to fall into a more collaborative rhythm of enjoying music with each other. “We decided to become a band way before we started playing together because we are friends,” says Cutler. Their desire to share creative process with people they care about, and work on improving it together has been the group’s mission. Tucker works because they perfectly combine friendship and musical chemistry. It’s what the band calls “silly love music.”

But Tucker’s not conventionally silly. Throughout our conversation, Tucker defined their sound as “sad college kid music.” Their lyrics and instrumentals conjure up feelings of the best parts of dark, college angst. According to Schoen, they enjoy a “simple, hot beat,” but also love experimenting with weird rhythms, often throwing random chords on “normal-sounding music.” 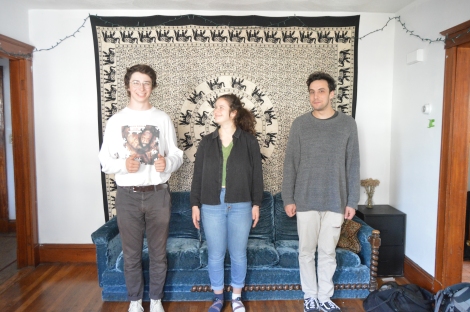 Tucker’s musical influences span so many genres and styles that it was almost impossible for the trio to narrow down their favorite inspirations. For Schoen, her greatest inspirations are “a mix between bands doing things similar to what we might be doing, but also soul.” The tendency of bands like Palm and Big Thief to pick up a quirky, complicated take on established hooks appeals to Tucker’s drummer and obviously translates into the way she approaches her own stylistic contribution to the group’s overall sound. Berl admitted to liking more “poppy” music than his band mates do. He tends to find himself gravitating towards “regular rock, grungy stuff” like Weezer. For Cutler, groups like Krill and Tiny Hazard are appealing for their busy instrumentals underneath emotionally and physically raw vocals. But he pointed to jazz artists like Gilberto Gil as inspirations with their expert execution of genre-blending (punk, rock, reggae, blues) via seriously swanky chords. Combining the best of indie rock, pop, and jazz, Tucker produces a sound that might be labeled as funky, psychedelic rock, but doesn’t quite fully encompass or fall into any one category. Tucker achieves their offbeat sound by manipulating classic plays on various music classifications, making vastly different genres their own while still creating cohesive music.  Berl explains that Tucker’s style of music is a “thing that sounds normal, but is a little off.”

From the beginning of our chat it was clear that despite the members’ differences, they had found unlikely chemistry. Tucker isn’t just a band—they’re a group of friends, puzzle pieces that just fit despite how different they are. According to Cutler, common ground and understanding is far from lacking in Tucker. “Although we listen to different types of music, there’s a basic similarity between some of the styles and what we like in certain music, regardless of genre,” says Cutler. In listening to “room that’s cold,” one of three songs labeled stragglers on the band’s Bandcamp profile, it’s clear what exactly he means—the song is the result of three complicated and separate pieces coming together to create music that’s cohesive but with a little room for the best kind of chaos.

The trio met through BEATs, Tufts’ trash percussion group, which allowed the trio to start creating music with each other in a friendly, performance-geared environment. Cutler believes that the band’s involvement in BEATs was essential to their relationship, as it was their first opportunity to be “constantly working together creatively and have internal favorites.” Despite varying musical ideas, Tucker largely avoids conflict because collaboration has always been key for them. They embrace and fully take advantage of each other’s knowledge and perspectives through a shared love for  theory tricks. This love is the basis of a moment that Josh describes as one of the group’s fondest memories: “[Noah] started playing this guitar riff, I started playing this other thing, and then without hesitation Zoe comes in with this really weird timed, really cool thing.” The three all described it not only as one of their favorite songs, but also as one of the coolest moments as a group. They might not actually be related, but their dynamic, one that the band jokes is akin to that of three “sister-cousins,” contributes to their unique sound and is a part of the reason for their standing as a hot band on campus.

Not even a year since the group came together, Tucker is making their mark on the Tufts music scene. They have been featured in the Applejam concert series, WMFO’s Tinier Desk series, and have even performed at an event at the Twin Oaks commune in Louisa, Virginia. As far as what comes next for Tucker, we shouldn’t have any expectations at all. Zoe puts it simply; “We will see. No rules; anything is possible.” That open approach is also apparent in the evolution of the band over the course of the its short tenure—the group has played in a couple different iterations, including one with the friend and fellow BEATS member, Tucker, for whom the band is named. The group has even undergone a name change in its short life; the trio performed under the name Hugo Chavez before settling on Tucker. While fans shouldn’t expect any more name changes, they should anticipate a release this month. Their working album, Sludgebad, is set to come out in May. Berl’s graduation from Tufts next month will not signal the end for Tucker. He seems hopeful about keeping the project alive. “Tucker started out as sending files back and forth. I feel like it could probably continue that way,” he says. With the dedication that that each member has devoted to Tucker, it is certain that no matter their path, as they tell me at the end of the interview, “love will prevail.”