Many artists go on tour in celebration of an album, but Tokimonsta is on tour in celebration of having her life back. On the rebound from a rare brain disease called Moyamoya which left her unable to speak, walk, or enjoy her own music, the Los Angeles-based producer is back on tour. Melisma caught her Boston stop at The Sinclair, where she performed material from her newest album Lune Rouge alongside her classics.

Massachusetts native and Night Slugs artist Kingdom warmed up the stage with a set that dexterously weaved between his own original material with Syd, heavyweight cuts like “Betise” by Omo Frenchie, and a Missy Elliott flip that even his parents (in the crowd to support him) appeared to enjoy.

After Kingdom steadily worked up the tempo from 113 to 140bpm over the course of an hour, energy was high on the opening bars of Toki’s intro track, a stretched, airy instrumental that is reminiscent of Flume’s 800% slowed down intro version of “Lose It”. Unlike Flume’s intro, slowly introduced to the crowd while the house lights are still on, Toki’s intro stretched on for ten minutes in the dark, and the crowd pretty quickly lost its patience.

Despite the long dark wait for Tokimonsta to appear on stage, her stage presence instantly won back the crowd. Her enthusiasm for performing live shows, even on a Tuesday night, was astounding.  Working from new cuts off of Lune Rouge back into her classics, Toki’s incredible smile and impeccable transitions lit up the room. In a heartfelt moment mid-set, the producer touched on her experience with Moyamoya. “It was a really harrowing time in my life, but I knew that there was a light at the end of the tunnel, and I’m so happy to be with you today.” 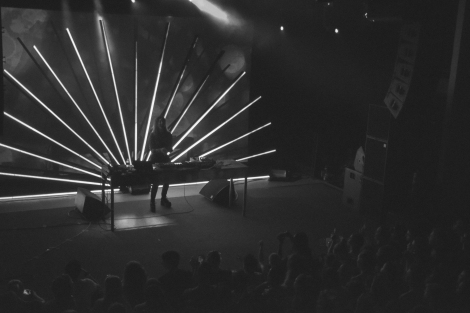 After launching into “Alright,” by Kendrick Lamar, “It G Ma,” a flip of “2 On,” and the night’s second fantastic Missy Elliott edit, Tokimonsta’s set let loose into the euphoric future bass sound that originally brought her into the spotlight.

It’s also worth noting how nice it was, in contrast to so many electronic shows I have attended, to see such a diverse crowd show up to support Toki. This reminded me of the words of Dee Diggs, a prominent Boston DJ who once told us, “If you aren’t giving different kinds of people opportunities, your scene is going to look a certain type of way basically because you have crafted it to look that way.” Having such a positive, balanced crowd at the venue really made the show, and Boston promoters ought to take note.