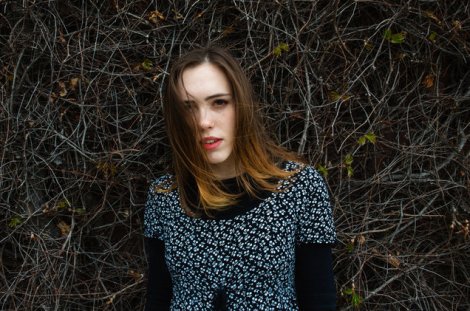 Soccer Mommy is an ironically apt name for Sophie Allison’s solo project. In a phone interview, she explained that she began writing songs when she was just 5 years old, and by her teenage years was posting heartfelt lo-fi EPs online. Most of her plaintive songs revolve around classic teenage tropes (relationships, ennui, and sentimentality to name a few), but her lyrics are so thoughtful and reserved that they suggest an author beyond her years. Now 20, Allison writes from her own perspective, but with a distinctly wise, almost detached viewpoint that speaks volumes about her personality. She attributes this character of her music to the fact that she does not write songs about things happening in the moment, but “rather … when reflecting on something, so I think it gives me a little more insight when I’m writing.” Accordingly, most of her songs are intimate reflections, focusing on the minute, relatable parts of life that any good singer-songwriter knows how to pinpoint. But a few tracks go far beyond this simplicity: “Cool” is a short story about Mary, a sadistic girl with a “heart of coal” that will “break you down and eat you whole.” While these lyrics make this character sound evil, within the world of the song, Mary comes off as an impressive force of nature not to be messed with. To Allison, Mary was not a real person, and she saw the character instead as an aspirational figure, an “idea of what you want to be… an idealization of a person.”

Allison began posting songs online while still in high school, slowly building momentum on Bandcamp with bedroom-recorded EPs brimming with sweetly sad songs like “Switzerland” and simple but impressive guitar-led instrumentation. For her debut album Collection, she re-recorded and repackaged some of her best tunes, buoyed by two new tracks “Allison” and “Out Worn.” On her forthcoming album Clean, she furthers her previous work with the aforementioned “Cool” and the similarly strong-spirited “Your Dog,” where she shows off her confidence in powerful resistance to a controlling love interest.

I talked to Sophie about her opinions on Lil Uzi Vert, being a young person in the music industry, and what her music would taste like.

What do you think is the hardest part of being a young person or a young woman in the music industry today?

I guess, for one, if you want to do it for a career, it’s very thankless at first and very draining of you emotionally and financially. It’s very hard to do it until you have some label backing when you first start, it’s really difficult. And also people a lot of the time don’t take me seriously especially being a woman, and a lot of people treat you like you’re not a person and it’s kind of dehumanizing, so that’s difficult to deal with.

On that same note, do you feel more comfortable in your new style of studio recording, as opposed to your lower-fi bedroom stuff on Bandcamp? I just thought it was such a smooth transition, since your music loses none of the intimate feeling.

I liked my old style a lot, but I think that the new stuff is way more like what I imagined for the music.

Who are some of your favorite current artists? Is Lil Uzi still up there?

Definitely. The new one in the rap scene is Trippie Redd. Mitski is always a favorite. Yo La Tengo, I love. I love Jay Som so much, and they’re good people as well.

Besides not having to go to class, what’s the best part of being out of school and on the road?

I would say playing the shows, but that’s kind of [a boring answer], so just travel. It’s cool just getting to travel around basically for free. Getting to see all these new cities. Especially when it’s a good group of people in the band, it’s so fun to just travel around with your friends.

Has there been a favorite city you’ve been to?

We loved Vancouver, that was a huge one. Portland’s really cool too. Obviously I always love Boston and New York because New York I lived there, but Boston: my sister went to school there, so I went there a couple times, and her roommate and her friends still live there, and we stay with her every time. We visit some spots nearby in Boston, [especially] the Allston area.

If your music was a type of food, what do you think it would be? What would it taste like?

Hmm, I don’t know, that’s so difficult. I feel like some of it would be like bubblegum or something, kind of candied, kind of sweet and poppy. Or maybe like, tea maybe. It’s pretty calming.