By Katie Fielding and Diana Hernandez

While MGMT may be known primarily for their 2007 hit singles “Time to Pretend”, “Electric Feel”, and “Kids,” the band is proving that they are much more that their most commercially successful releases. After releasing their fourth studio album, Little Dark Age, in February to much critical acclaim, the band embarked on a US tour. Melisma was able to check out their Boston show in March.

MGMT started the show with the title track, “Little Dark Age”. The stage was filled with smoke, while a screen in the background played clips of a woman smoking, matching the brooding tone of the song. They continued effortlessly blending music and visuals, creating an interesting and creative set. During “She works out too much”, Andrew Van Wyngarden, the lead vocalist of MGMT, rode an elliptical as he sang the lyrics to the song while workout videos from the 1980s played behind the band.

MGMT’s fans were a diverse group ranging from young women to middle-aged people, but they were united by the band’s infectious electric-pop. The crowd got particularly excited about “Time to Pretend,” “Electric Feel,” and “Kids”—which they combined with part of a cover of Limahl’s “Never Ending Story”—but it was clear that they enjoyed the whole setlist, as well.

Over a decade since their first release, MGMT is still packing theaters with new and old fans alike. It is clear from their album and their performance that they are on track to continue their success. 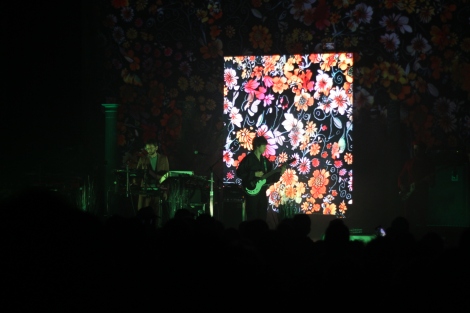