There’s really nothing quite like a great rock concert. With the right band and the right crowd, opposing energies mingle in a way to create a completely cohesive environment, an experience that involves every participant. That’s exactly what Will Toledo and Company gave Boston: a stellar example of just how good a rock show in 2018 can be.

The night’s excitement began early with openers Naked Giants, a trio who form an integral component of Car Seat Headrest’s touring lineup. With a manic, infectious stage presence, they dashed through a setlist that mixed diverse influences from 90s slacker rock and angular post-punk and on “TV” to bluesy classic rock on “Slow Dive II”. Henry LaVallee’s frenetic drumming set a pace for the rest of the concert as he veered off into hyperspeed in his frenzied solos, while Gianni Aiello’s voice rang out clearly over the roar of Grant Mullen’s screaming guitar work.

The main event of the evening was the expanded version of Will Toledo’s long-running project, and the seven-piece group he brought to the Royale pulled no punches. The band was in perfect form from the outset with their cover of Lou Reed’s “Waves of Fear,” making the classic track sound every bit their own. As they launched into “Bodys,” Car Seat Headrest really hit their stride. They ramped up the energy with the danceable rapid percussion, and the crowd kicked into high gear in response. Every uptempo song turned into a dance party en masse. On fan favorites “Fill in the Blank” and “Cute Thing,” the audience was so familiar with the music that the concert became an immersive experience: a tight band in perfect form feeding off its fervent fans just as much as the fans engaged with the performance.

A surprise turn came on the cover of “Powderfinger,” where lead guitarist Ethan Ives sang strong, plaintive vocals, and Toledo and Mullen contributed gorgeous backing vocals that turned the concert into a youthful snapshot from a modern-day Crazy Horse tour.  Likewise, “Drunk Drivers/Killer Whales,” perhaps Toledo’s most indelible song, was presented faithfully with superb interplay between the guitars, with concerted noodling befitting the best moment of a a War on Drugs concert. 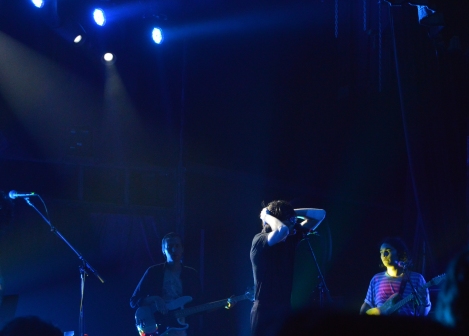 From the metronomic drumming and percussion to the intricate guitar work, the most shockingly powerful element of Car Seat Headrest’s performance was the cohesive interaction of a band at the height of its powers. With every member of the group playing an essential role as part of a greater whole for a stunning show, the performance cemented CSH’s status as one of the best bands touring anywhere in 2018.