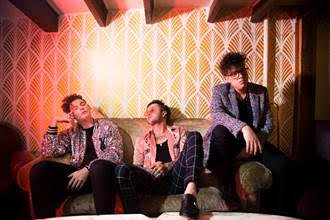 lovelytheband, consisting of vocalist Mitchy Collins, guitarist Jordan Greenwald, and drummer Sam Price, headlined a sold out show at The Sinclair on October 13th. Collins suggested it was the audience’s and his first date together. It was the band’s first time performing in Cambridge, nonetheless, to a sold out show. Their first time headlining a tour. Many fans’ first time at a lovelytheband show. It was a night of many firsts.

lovelytheband captivated the audience the moment that they walked onto the stage, wearing Harvard sweatshirts, and began to perform, “finding it hard to smile.” Collins pointed out their attire, mentioning his dream to become a rockstar and his father being an alumnus at Harvard. The band created a personalized concert experience for their fans in the greater Boston area, especially the Harvard students in the crowd with Harvard being only a few feet away from the venue.

Collins casted a spell on the audience with his soothing vocals and his kind words. The audience screamed their lungs out to each song performed from the upbeat, energetic “coachella” to the emotional, heartfelt “maybe, i’m afraid.” Collins established an intimate interaction between the band and their audience, talking about the importance of mental health before introducing “maybe, i’m afraid.” Collins filled the audience with anticipation when describing their hit song, “broken,” as the song that started it all. The crowd sang along as if it was their anthem. Collins introduced his friends during the encore and lovelytheband closed with, “these are my friends,” filling everyone with warmth.

Collins might not be a Harvard graduate like his father, but he sure has become a rockstar along with the rest of lovelytheband. Check out their new album, finding it hard to smile. They’ll be back on December 3rd at the House of Blues.