Soccer Mommy’s Clean was one of 2018’s musical triumphs, an introspective meditation on romance that is at times, a melancholy soul-crushing punch delivered straight to the gut— “Checked the window just to see if you’d come back to me”— and at others, a fiery realization of self-worth— “I want a love that lets me breathe / I’ve been choking on your leash”.

Opening for Soccer Mommy was the Chicago-based band Ratboys, whose set alternated between the tender sounds of Midwest emo, and bouncy, frenzied punk rock. They prefaced each song by explaining its source of inspiration— “You’ve Changed” is a song about that bittersweet feeling of seeing your friends grow, knowing that they will never be who they used to be, and “Elvis is in the Freezer” is about lead vocalist Julia Steiner’s family storing the corpse of the family cat (named Elvis) in their freezer, reluctant to finally bury him and forever part ways. Their sound completely filled Brighton Music Hall with their rambunctious energy, and left the crowd thoroughly buzzed.

Fifteen minutes later, Sophie Allison and her band began their set, but not before they brought two large skeleton dog props— one of which is headless— onto the stage. Their first song is the recently retooled and re-released “Henry” from 2016’s For Young Hearts. Allison’s unornamented voice carries a slight twinge of resigned distance as she reflects on a love that she didn’t want to give up on, but had to abandon anyway: “But he’s too gone to open up/ just like punching walls, it always hurts ’cause it never gives enough.” “Try” from 2017’s Collection followed, a song about that all-too relatable “oh fuck, here we go again…” feeling that comes from realizing you’ve fallen for somebody, and the endless, all-consuming romantic daydreams that ensue.

“Last Girl” followed, with Allison singing of raw, overpowering insecurity, comparing herself to the ex-girlfriend of her partner, over the sounds of oddly (considering the song’s subject matter) upbeat guitars and drums. I got chills when she delivers one of my favourite metaphors of the year: “I am just a dying flower / I don’t hold the summer in my eyes”. They then took a moment to formally introduce us to the two skele-dogs on stage— they’re named Bruiser and Scrappy by the way— using this as a befitting transition into “Your Dog”, one of the night’s groovier and most fierce songs. A heavy, thumping bassline and exceptionally tight & plucky guitar work supported Allison’s dry yet fiery delivery, renouncing a lover who makes you feel small, used, and trapped. She doesn’t just want better or deserve better— she is better. On “Cool”, backed by one of the punchiest electric guitar riffs I’ve ever heard, Allison’s persona was detached and cold, the indifference in her voice radiating a completely effortless cool that coats the entire room.

The band then exited the stage as Allison plays a few songs solo. She began with a cover of Bruce Springsteen’s “I’m On Fire,” slowing it to a crawl, stripping it down to nothing more than a few sparse notes from an electric guitar and her haunting, pained, reverberating voice, transforming the song into a slow burner that brings new meaning to the untapped melancholy present in the lyrics. She launched into album opener “Still Clean”, one of the most despondent and forlorn songs off of Clean. There is a striking contrast between the track’s quiet and soft sound and the grotesque and twisted metaphor of a lover eating her flesh like a feral animal would, “Left me drowning once you picked me out your bloody teeth”, but the vividness of this imagery only increases just how hard the song’s sombre and dejected message hits. 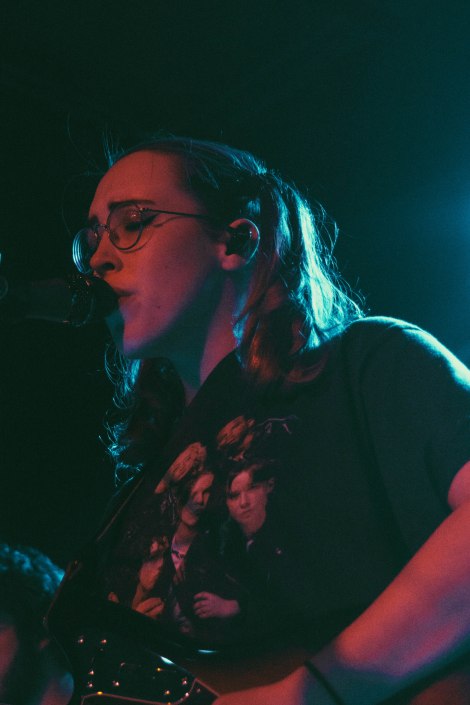 After the band returned to the stage, they began to bring the set to a close. As the meteoric “Scorpio Rising” slowly moved along, Allison’s voice shifted between a wail— “I don’t think of my life / Anywhere but in your arms tonight”— a gentle coo— “It’s a bite of the apple, the touch of your lips / I’m stuck in the bathroom and sick over it”— and an earnest croon— “And I’m just a victim of changing planets / My Scorpio rising and my parents”. It’s the most emotion her voice had carried all night, a departure from the reserved cool she adopted for the rest of her set. Likewise, the band’s array of electric guitars and drum slowly grew from a quiet whisper into an earth-shattering roar, culminating in an expansive and lush wall of sound. They ended the night with an encore, playing the solemn yet ultimately hopeful “Wildflowers”— “I want to be who I wasn’t”—before exiting. It felt like a cautious resolution, the perfect full stop to a set full of songs exploring and reliving the traumas and troubles of relationships.