Opening for Anderson .Paak was Tayla Parx, a Texan singer-songwriter whose music is colorful, empowering, and gender-bending. Her energy was palpable, her set was vibrant, and her good attitude was infectious. Her feisty, upbeat songs managed to get everyone in the audience up on their feet. Parx’s powerful stage presence, combined with her raunchy sense of humor, made her the perfect opener for Anderson .Paak. She even referred to one of her songs as “some ass shaking shit,” prompting a bout of laughter from the audience. Her presence was all-encompassing, radiating through the seats of Orpheum Theatre. Despite being the only person on the stage and having minimal props, she was able to make her mark on the people of Boston with her powerful lyrics and lively choreography.

From the very beginning of Anderson .Paak’s set, it was clear that this wasn’t going to be your everyday concert. For one, he played at a 200-year-old theatre that still bears resemblance to an opera house – a venue that a lot of artists would be intimidated by. Anderson .Paak, however, had no trouble bringing this vintage theatre to life with his music. He also started his performance sitting behind a sheer curtain and a set of drums. Though this was an unorthodox way to perform, .Paak knew exactly what he was doing. He had created an intense buildup of excitement in the crowd, hundreds of people teeming with energy, impatiently waiting for him to reveal his face (and, more importantly, his pearly whites). The curtain soon dropped, and Anderson .Paak revealed himself, wearing a white t-shirt, a red bucket hat, and a grin from ear to ear, finally confirming with the crowd that he does have “the best teeth in the game.” The stage was a renaissance painting come to life – a triangular composition with .Paak sitting in his throne of drums at the very center. The crowd quickly became mesmerized by the almost religious view of Anderson .Paak and his drums, and from that moment on, they were completely hooked.

At most concerts, the drummers are at the back of the stage, unnoticed and unbothered.  .Paak spent his set moving between the drums and the stage, while still maintaining a high-energy ambience throughout. He kept his drums at center stage, and zealously drummed away while simultaneously singing his heart out. Though many of the audience members originally thought that Anderson .Paak’s choice to stay behind the drums was a little strange – it represented a deliberate decision made to better appeal to his audience. It helped .Paak break common stereotypes about drummers and their range of abilities. It also helped him display his versatility as an artist and gain respect from critics and audience members alike. 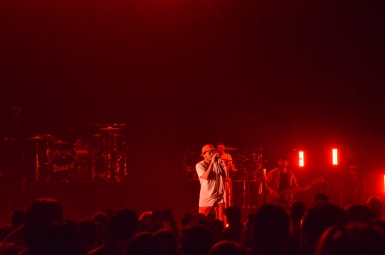 Anderson .Paak also had a newfound confidence at this performance, likely due to his Grammy win for the single “Bubblin” only two weeks prior. As a recent “Grammy-winning artist,” .Paak knew what he deserved from the crowd. When performing “Suede,” an NxWorries song, he chanted the album title, Yes Lawd! with the crowd. “Y’all gotta act like I just won a Grammy though,” he screamed, craving even more enthusiasm from the audience. “Yes Lawd!” they chanted back even louder, filled with a sense of happiness and belonging that is seldom generated at a 200 year old vaudeville theatre. “Suede” proved to be one of the songs that generated the most hype during the entire set. The audience sang most of the song with Anderson .Paak, chanting “If I call you a bitch, it’s cause you’re my bitch.” The spectacle was amazing – hundreds of people screaming back to a single person, and definitely the most people I’ve ever seen say the word “bitch” at once.

Anderson .Paak ended his set with a tribute to Mac Miller – a gut-wrenching cover of Miller’s “Dang!,” followed by a chant of “We love you forever Mac!” .Paak then thanked the crowd, took a few bows, and walked offstage, seemingly satisfied that he had accomplished everything he had set out to do in Boston. Onto the next city.

Dates for Anderson .Paak’s new tour, “Best Teef in the Game,” are here: 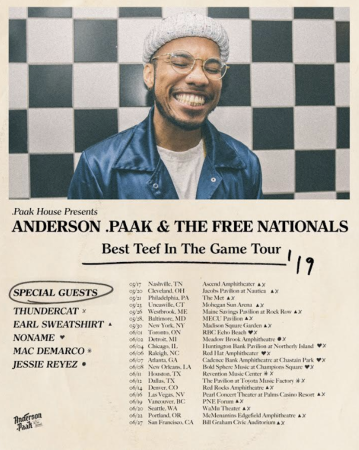