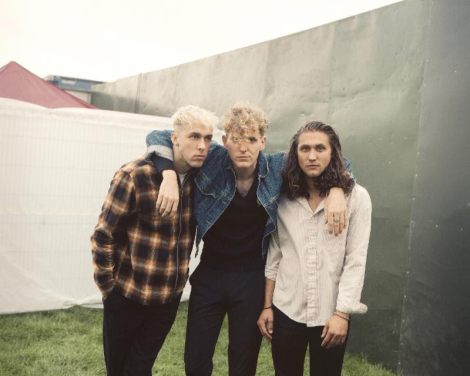 COIN is a Nashville based indie pop trio that just embarked on a tour with Young the Giant and Fitz and the Tantrums. Their upbeat tunes often reach beneath the surface and embody meaningful emotions. “Crash My Car,” their newest song, is a buoyant ode to reckless love that many predict will soundtrack this summer. Melisma had the opportunity to chat with lead singer and synth expert Chase Lawrence. Check out the interview below!

Melisma: How has the tour been so far? Do you have any wacky stories?

Chase Lawrence: No wacky stories, we’re only like 4 days into this tour. We played Red Rocks on day one, so that’s wacky in itself — it’s a legendary venue and they let us play. The tour has been great. Last night we played in Westbrook, Maine and it poured rain the entirety of our set. Every time we played harder, or a chorus would hit, the rain would pour harder. I was drenched, like I had jumped in a pool at the end of the show, but it was a good experience and I was blown away that people showed up! That’s not really a wacky story but it was so special feeling like “people like this, people want to hear us doing this.”

Is there anywhere you’re really excited to play?

All of these cities that are so new to us, we had never played Maine before last night and that was lovely, the city was beautiful. I’m so excited to play cities like Atlanta, everywhere in Florida, [these are] the places we’ve headlined a ton and have always been so kind to us, so we’re really excited to play there. But also, every show on this tour has delivered in a way that we never expected. Opening is such a different thing from headlining — you play a few minutes in front of a lot of people who don’t know who you are, so that 28 minutes decides if they’re on board with your message or not. Honestly each show has delivered in a weird way, so I’m just excited for every show.

Melisma interviewed you the last time you came to Boston, last spring. (Check it out here) How do you feel you have changed since then?

Boston has always been a hard city for us, and I think that’s indicative of where we’ve performed in America. Last spring was when I felt it noticeably start to shift, and I felt like people understood what we were saying and having a two-way conversation. So I think it’s been a continuation of what started in the spring. I think we’ve changed a ton, and people are so much more open and so much more present and ready for our music, which is exciting. It’s also different, maybe in a dumb way, but we have fans now. We have always had fans, but we have fans that are supportive no matter what we do, and they’re excited about what we’re excited about. Maybe it’s less of us changing and more of our audience becoming more tolerant, understanding, and excitable, or the point of where we are with releasing new music. We finished the album right after that tour and that changed us in a lot of ways because we found out that we had all the pieces together, we didn’t need a producer, we did it all ourselves. I don’t know if we’ve changed that much, but we’ve definitely become more confident in who we are and it’s been the most tangible growth we’ve felt.

So you’ve obviously been busy going all over the country and releasing new music, what do you like to do when you have a second to chill?

I really enjoy watching sports, it’s a newfound pastime of mine. Sports are there for me when I don’t want to see people. I really love playing basketball, which is so random because I never played growing up. Music still finds a way to creep in — I am constantly writing, producing, co-writing with other artists and writers, I can’t keep off it. You asked me about pastimes, that’s really my hobby. And it feels so different, because it’s still an extension of myself creatively, but I’m not the one to actually sing it when it’s for someone else, so it takes a weight off of me and allows me to just create.

If you were to open Spotify (or Apple Music or Pandora or whatever, I won’t judge), what would be the last song you listened to?

It would probably be Hard to Love by The Drums. I listen to that song every day, and I love the band.

“The song of the summer,” I don’t even know what that means. It’s funny because I would say stuff like that when I was more of a fan and less of a creator, I would totally say “this is my song of the summer,” so I’m trying to remember what those ingredients are that make that song. I think it has to be this weird, visceral thing, something that people can latch on to. Something so mundane can become so exciting when it’s disrupted completely, which is the message of the song. I wish I could explain it or put a finger on it, but it just sounds like the song of the summer, whatever that means. If I could tell you what those ingredients were, I would replicate it over and over and over again but sometimes you just get lucky and feel like “this is definitely what my summer sounds like and feels like.” I appreciate everyone saying that [about Crash My Car], and it was definitely my song of the summer last year, which was the time we wrote it, so I listened to it all summer.

This is a weird question: how would you describe your recent releases as types of cereal?

I would definitely say Crash My Car is Cinnamon Toast Crunch because it is satisfying on all levels — I was way too ready for this question. I would say I Want It All is Special K Red Berries, a big favorite cereal. I’d say Cemetery is like Frosted Flakes because it’s kind of bland but has a really good message in it. And Simple Romance is Cap’n Crunch, kind of crispy and crunchy but you can only eat two bowls of it until you’re like “that’s enough.”

What are your goals for the second half of 2019?

COIN is performing at the Rockland Trust Bank Pavilion on Friday, 6/21 with Young the Giant and Fitz and the Tantrums.