Fans lined up to see the Marías at a sold-out Brighton Music Hall on Friday night beneath a shroud of hazy, late-July humidity. The weather, inspiring lethargy in most, seemed to be at odds with the artists preparing to energize the eager crowd. For sure, the venue’s ceiling fans provided little relief to the closely packed crowd. Nevertheless, it was clear that Boston had turned out in force for the Los Angeles indie band consisting of lead vocalist María, guitarist Jesse Pearlman, drummer Josh Conway, keyboardist Edward James, and trumpeter Gabe Steiner .

Paul Cherry primed the audience with a short set which featured his oldest and newest music. The crowd loosened noticeably; the tensions and frustrations of the workweek eased away with the wandering, carefree keys on songs such as “Like Yesterday.” Casual melodies bedded with relaxed drums and guitar blended excellently with Cherry’s nonchalant vocals; he delivered his lyrics as though relating details about his life in a conversation with a friend. By the time he and his band left the stage, the packed audience was ready for The Marías. 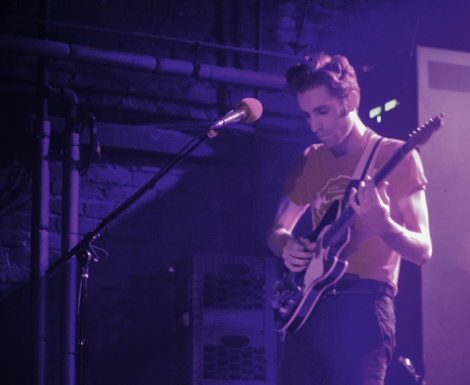 The crowd erupted when all lights but the disco ball faded out and the band took the stage. They opened with “Cariño,” a single off their 2018 EP Superclean, Vol. II. Lead vocalist María drifted through the song, gently weaving each lyric together with a relaxed agility. María’s soft vocals conveyed the meaning of the title word better than any literal translation could; the chorus tells us “cariño eres un amor” and María’s singing shows us—lets us feel—that this love is an overwhelming tenderness, something stronger than an ordinary love.

After a few songs, María put down her guitar, and invited the audience to dance. As hot as it was in the venue, I wasn’t sure how fans would react to this change in energy. To my suprise, the crowd was excited to get moving to the robust “I Like It.” As the show went on the audience was equally in the mood for dancier tracks like “I Don’t Know You,” “Basta Ya,” and their cover of Britney Spears’ “…Baby One More Time,” slow, swaying songs like “Over the Moon,” and immersive, psychedelic songs like “ABQ.” However, categorizing these songs as I just have does not do them justice. The Marías’ sound tends to defy generic qualifications. It was on display that night as María’s smooth voice accompanied by understated rhythms cast out an aura of hazy contentment—a dazed peace. The music seemed to sustain the crowd through the hot night; the audience’s enthusiasm never wavered as The Marías played on with an infectious energy. They are a truly independent band—not yet signed, as María herself noted, by any label. Their legal independence is underscored by their unique performance. Between María’s on-stage charisma and the band’s overall cohesion and talent, the show was a perfect exhibition of their style and spirit.