Californian singer-songwriter Chelsea Wolfe has blended elements of doom metal, folk music, and gothic rock across her discography, but her latest record, 2019’s Birth of Violence, strips back the sound of her previous work to just chilling vocals and an acoustic guitar. The spare quality of Wolfe’s newest output mirrored the atmosphere of her performance on October 29th at the Royale, where she played a quiet, rapturous set of dark, acoustic ballads to a mesmerized audience. 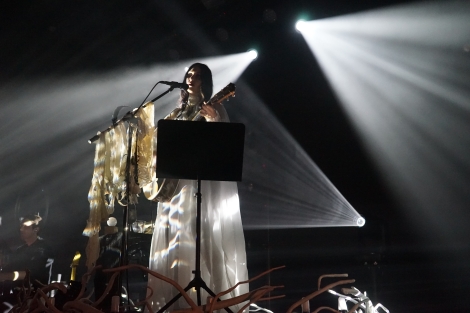 Touring with Wolfe was fellow Sargent House signee Ionna Gika, who this year released her debut record Thalassa. Gika’s work also contains tinges of gothic-folk songwriting, making her a compelling and worthwhile opening act for fans of Wolfe’s music. However, elements of dark, glitchy dance music set her sound apart from the headlining act’s—fans of Jenny Hval should take note. Onstage, Gika performed with the aid of a bassist, cellist, and skittering, ambient electronic beats backing her distinct, haunting vocals. Her set received a warm, if not subdued, reaction from the crowd as fans anticipated Wolfe’s arrival to the stage.

Wolfe came out a little after 9 p.m., opening her set with “Flatlands,” the lead single from her 2012 album Unknown Rooms. The stage was dark apart from a central platform, illuminated in crimson light, on which Wolfe stood with her acoustic guitar, clad in a long, white dress. Around the platform was a stage prop which resembled interlocking tree branches that surrounded Wolfe, encircling the singer like some sort of gothic, Brothers Grimm-esque crown. Combined with the often-shifting light effects which alternately illuminated and obscured the artist, the elaborate stage presentation Wolfe put together for the show helped to build upon the dark and sometimes occult themes in her music.

Following “Flatlands,” Wolfe played two singles from her new record, “American Darkness,” and the title track “Birth of Violence.” Although much of the audience seemed to know the words to these songs, instead of singing along, they watched with hushed awe as she performed, hardly moving apart from the odd sway or too. The entire set carried a mysterious, unreachable allure, finding its power in subtlety and quietude. Wolfe went on to play five more acoustic cuts from Birth of Violence, including the Americana-inspired “Deranged for Rock & Roll.” A backing beat and keyboardist added atmosphere to the performance of “Sick,” a track from 2013’s Pain is Beauty, and “Cousins of the Antichrist,” from 2010’s The Grime and the Glow. Between tracks, Wolfe kept her interaction with the audience minimal, often letting the audience bask in the silence between songs before overwhelming them with another bewitching acoustic ballad.

Besides material from her studio album output, Wolfe also played two covers. The first was a stripped-back, chilling rendition of Roky Erickson’s hokey Halloween anthem “Night of the Vampire,” to which she brought a level of necessary seriousness. The second, a slowed-down version of the Joni Mitchell track “Woodstock,” was cut off midway through and restarted again as Wolfe botched the song’s chorus at the first time of asking. “Shit,” she said. “Let me start that one back again.” This was perhaps the singer’s only break from the elusive intangibility of her performance, reminding the audience that Wolfe is, in fact, human, and causing them to erupt in laughter for the first and only time that night.

Wolfe concluded with “Little Grave” before returning for a two-song encore, during which she played “Preface to a Dream Play” and “Highway,” two more tracks from Birth of Violence. The applause which resounded to encourage Wolfe back onstage for an encore was the loudest moment of the entire show, jarring and alien in comparison to the hushed nature of the performance, and even as she returned to the stage, she seemed to exist outside the realm of that noise, moving languidly and fluidly to her platform before the lights fell and the audience was alone with Wolfe’s voice once more.