Seeing Julien Baker perform live is a spiritual experience. The energy and the emotion, the feeling of somehow opening up (both unraveling and blossoming open), is a powerful testament to the strength of Baker’s lyricism and her captivating instrumentals. While the theme of “sad-girl music” runs deep in Baker’s associations, her music is itself so much more a testament to what said “sad girls” do with and do after that sadness. Melodic and soft, hard and screeching, Baker represents the spectrum of reactionary and ruminative emotion, and her live show brought everyone to the edge of this emotional trench.

The night opened with Mini Trees, a musical project spearheaded by Lexi Vega. Vega brought a very charismatic energy to her performance, the set feeling very lowkey, introspective and fun. Bedroom indie pop as a genre feels very intimate, like we the audience get to look in on someone else as they work and create; this was very much that feeling, and Vega’s performance on stage with her blue electric guitar drew the audience in all throughout. The music off her debut album, “Always in Motion” was so effervescent and wonderful, and a highlight song for me was “Youth”, for its touching and hurt lyrics and its simple pared down guitar.

The second opening act of the night was Thao Nguyen, who burst onto the stage with a loud and spreading energy. Thao’s music was hard and upbeat, with faster vocals and fiercer guitars. The music was fun, dipping in and out of an array of genres. Her new album shone through with a great and terrible sense of emotional upheaval, and the titular “Temple” off her most recent album was a great example of this musical signature. Towards the end of the set, Mini Trees’s Lexi Vega and Julien Baker came on stage to jam out as a group– an awesome interlude which brought them all together in a toned-down, friends-around-a-campfire sort of feeling. 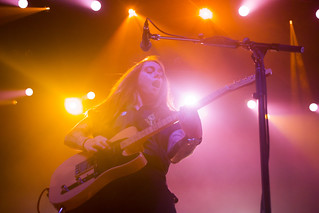 Julien Baker, the woman of the hour, followed these two acts with her natural angry grace and expressive vocals and lyrics. Baker opened with “Hardline” off her new album, which fit so snugly as the opener as it builds up and grows throughout the course of the song, and the chorus, with the lyrics “so then I’ll split the difference / between medicine and poison” seems tantamount to the whole of Baker’s music. With an 18-song setlist (plus 2 encore songs, including my personal favorite, “Appointments”) Baker’s music weaved in and out of her own central themes, here tinged with more positive and hopeful notes. Songs like “Faith Healer”, “Sprained Ankle”, “Turn Out the Lights” and “Sour Breath” show the range of her three albums while driving home her signature touch when it comes to hard-hitting questions of the self. Seeing Baker sing live, it builds on the emotional center of all her very personal music. At quiet moments her voice pierces through the dark of the crowd in sweet and clear tones, and at moments where the music crescendos, she belts out and yells to the audience, putting her entire body into the music. She connects to the music, so much so that it’s almost impossible for the audience not to join in and feel it just as deeply. If you ever get to see Julien Baker perform live: rejoice!

MELISMA GIVEAWAY ALERT!!! We’re collaborating with @in2unemusic to give away two tickets to @wombatsofficial and @clubhouseband at the House of Blues next week!
WELCOME BACK!!! Melisma will be holding our GIM next Wednesday, January 26 in the Crane Room. Be there!
Happy Spring Semester!
It’s been a minute since we’ve had a Friday Five…but we’re back (albeit delayed).
Some new albums out on Friday that are definitely worth a listen!
Another #throwback to @samiatheband at Brighton Music Hall 10/1. Read the review at the link in bio and look at these cool photos shot by our very own @ixnsmith #samia #band #music #livemusic #musicjournalism #concert #concertphotography #magazine #melisma #boston #brightonmusichall
Melisma’s own @lolanedic covered a @thefrontbottoms show in October, and you can read her review on the Melisma website right now!!
For today’s Friday Five, we have some massively anticipated releases that we can’t wait to dig in to!
Another show Melisma had the honor or covering was Neil Haverstick + Umbrella Pine at the @lilypadinman on 10/9! Check out the review by @jacks_roads #melisma #melismamagazine #review #concertreview #journalism #musicjournalism #music #livemusic #photography #concertphotography #boston #jazz