Full transparency: I play multiple instruments and love abstract art and free jazz. I remained cognisant of those facts throughout the show Saturday as I thought about whether or not anyone without that background would appreciate the music played throughout the night. If you hate the idea of music not having a recognizable tempo, melody, structure, resolution, or anything that remotely makes music fun for you, this show probably wouldn’t have been your favorite thing in the world. However, if you already love jazz and want to check out a great venue in the Lilypad, or just wanna take a walk on the wild side, Neil Haverstick and Umbrella Pine are right up your alley. 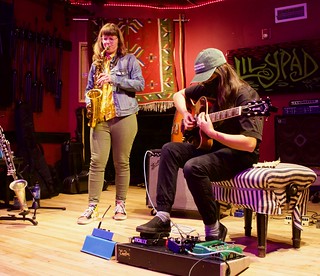 The Lilypad, located on a nice strip of Cambridge Street at Inman Square, is wonderfully inviting for a space that hosts music as provocative and niche as was played. Upon arriving, the host was immediately glad to see me, and invited me to talk to Neil before the show started (both being equally warm). The Lilypad’s about as big as a decently sized classroom, with a few rows of benches with cushions and chairs facing a lightly decorated stage. A lot of love has gone into the space, exemplified by vibrant art on the walls and some subtle yet effective lighting (I got in for free because I’m a Big Shot Press Guy now, but seeing how cheap tickets are is pretty darn cool too).

Umbrella Pine, composed of former Berklee roommates Magdalena Abrego and Allison Berick, immediately set the tone for the night. And what a tone! Both of them are distinctly good at their instruments, and fluently conversed with each other through their improvisation. They also both looked to be using their instruments. Magdalena (on guitar) was sometimes laying down funky chords or playing a droning pitch, at times overpowering and at others approachable and serene. At points Allison would be playing a sweet lick, and suddenly play a noise out of an instrument that makes it sound like the saxophone is trying to play the saxophone (there is no other way to describe it, I’ve tried).  Eric Dolphy would be proud that Allison switched back and forth to a bass clarinet, and especially happy that it was played so well. And, while I’m name dropping jazz stuff, “Sextant” by Herbie Hancock came to mind more than once, which at least for me is always a good thing.

Neil had a similar sense of use, but executed his ideas with the help of a 7-string fretless guitar and four loop pedals, each of which recorded him playing for about 40 seconds. I was fascinated by the points when he would choose to start one pedal or stop another, the cycle of which would be continuous as long as one of them was still looping. Differences between real time and tempo ensured that the music was uncontrolled by either, forming a saucey, layered pastiche of ideas. Combined with a few other nifty pedals, each of which added a richly textured new character, it was sublime. He was also shredding every now and then too so that was fun.

The Lilypad has a packed schedule this Fall, and if you know what you’re getting into it’s more than worth the price of admission. Nice people, nice place, nice jazz-noises. Sure, you couldn’t really bop your head to it, but that’s not why you’d go there anyway. Neil’s 50th anniversary of quitting college was the other day, so let’s all quit Tufts, become professional musicians and go play at the Lilypad sometime!

Some new albums out on Friday that are definitely worth a listen!
Another #throwback to @samiatheband at Brighton Music Hall 10/1. Read the review at the link in bio and look at these cool photos shot by our very own @ixnsmith #samia #band #music #livemusic #musicjournalism #concert #concertphotography #magazine #melisma #boston #brightonmusichall
Melisma’s own @lolanedic covered a @thefrontbottoms show in October, and you can read her review on the Melisma website right now!!
For today’s Friday Five, we have some massively anticipated releases that we can’t wait to dig in to!
Another show Melisma had the honor or covering was Neil Haverstick + Umbrella Pine at the @lilypadinman on 10/9! Check out the review by @jacks_roads #melisma #melismamagazine #review #concertreview #journalism #musicjournalism #music #livemusic #photography #concertphotography #boston #jazz
We are going back and posting all the glorious photos and concert reviews (link in bio!!!) our staff have contributed throughout the semester! First up, @isaiahrashad who played the #houseofblues back on 9/8. Photos by EIC @ethanlambchop #concert #concertreviews #photography #concertphotography #review #magazine #journalism #musicjournalism #livemusic #boston #houseofbluesboston #melisma #melismamagazine
The newest inclusion on “Foraging,” @truefaithx’s new album is both dreary and dreamy, and a great listen as the days get colder and shorter!
An exciting group of records for this week’s Friday Five!
whoopsies, we forgot to post! our summer issue is out now – find physical copies at dewick, carm, olin, dowling, tisch, and eaton! and as per usual, the mag can also be found online on our issuu page (link in bio.)